Review: Vampire Diaries Episode 320 (Do Not Go Gentle) – The Original Bitch is Back

Romance, intrigue, witchy juju and of course murder. Just another typical decade dance at Mystic Falls High.  In The Vampire Diaries Episode 320 (Do Not Go Gentle), the Scooby Gang gathered at the decade dance to  what they do best  – screw things up. With just two more episodes to go I would love to be able to say how much I loved this episode and how anxious I am for The Big Reveal in the Season Finale – but I can’t. Some confusing magic went down and Alaric died – kind of – but seriously? I’m not feeling this plot line. Here’s why:

You Wear It Well

Esther showed up in a Beks suit and managed to fool Klaus; enabling her to continue her dastardly plotting with Evilaric.

Once again Damon proved that he is indeed the smartest person in Mystic Falls (not difficult when you think about it) by realising all was not well with Alaric. Nor sure why he chose to share this info with Dr Cray Cray; after all she’s been so useful in the past – but let’s move on. Meanwhile after some badgering from Caroline, Elena gave Stefan what he’s been hankering after – an opportunity to spend time with the Magic Vajayjay. 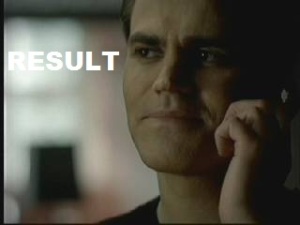 Let’s Do the Charleston

The population of Mystic Falls High turned out in their numbers for the 20s’ Decade Dance. They have no classes – or teachers – so they might as well go to social events. I felt for poor Rebekah. Can’t the writers cut her some slack and let her attend at least one school dance? Sheesh.

I cannot see the chemistry between them, but Bonnie and Jamie were getting along just fine. Maybe it’s because I’m just waiting for Jamie’s neck to snap or him to become vampire kibble.

Even an awkward interruption from Jeremy failed to dampen their fun.

The dance floor was chock-a-block with triangular action. If you were team Forewood, Klaroline or Stelena, this was the episode for you. Caroline gave Matt some good advice he’d do well to heed. 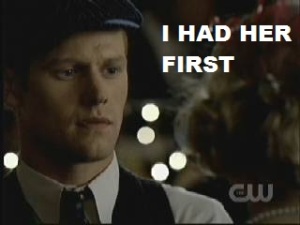 Tyler arrived to sweep Caroline off her feet. Sired or not, jealously is a powerful emotion. 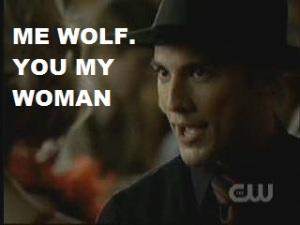 For Stefan and Elena it was just like old times until Damon interrupted them with the unwelcome news that Ric was off the rails and Something Must Be Done.

They barely had time to absorb this disturbing news before Mama O turned up to throw a spanner, or as it turned out half a ton of salt, in the works. It is indeed curious that no one saw Esther backing up with the salt spreader and driving around the building. Even more curious that with so many humans walking in and out of the building no-one disturbed the ring of salt. In any case Esther wasted no time in grabbing Elena and hightailing it back to the Salvatore crypt. 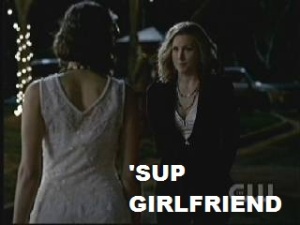 This unexpected turn of events created a host of problems for our gang, especially Bonnie, who was getting hot and heavy with Jamie when Damon cockblocked that action. 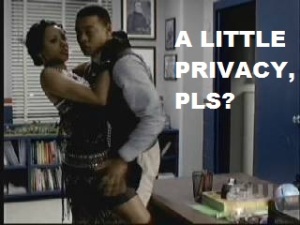 Tales From the Crypt

Once again Elena came face to face with Evilaric as Esther explained her dastardly plan to rid the earth of all vampires by turning Alaric into the Ultimate Original Vampire. Despite my reservations about the plot, Matt Davis has truly shone in the role of Alaric this season. He conveys so much menace and evil in his facial expressions it is truly outstanding. 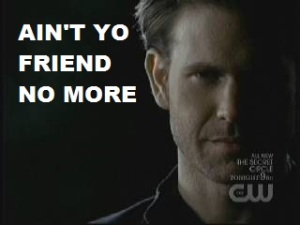 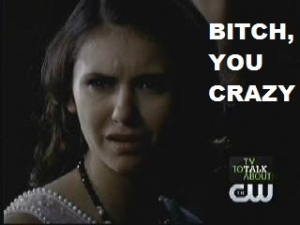 I would love to know what the writers were smoking the day they came up with this plotline. Alaric as an Original Vampire? I sat through nineteen episodes of varying quality for Evilaric to wind up as the New Big Bad?  You gotta be kidding me. This is so inconsistent with the mythology. Aren’t vampires supposed to grow stronger as they get older? Yet  Alaric will somehow be more powerful than Klaus? And how come Evilaric, who last week had a very well developed sense of self preservation, is OK with being used as a death pawn by Mommy Dearest? It makes no sense. As Esther described Evilaric’s new powers – faster, stronger – I half expected him to morph into Steve Austin (Cue Six Million Dollar Man theme music).

May I Have This Dance?

At the decade dance a bad evening got progressively worse. Klaus turned up to woo Caroline and was none too pleased to see her dancing with Tyler. 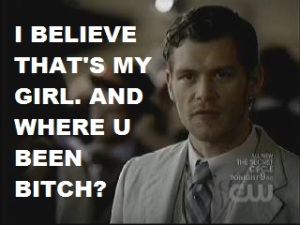 Caroline reluctantly accepted an invitation to dance from the Alpha Hybrid. He wasted no time in reminding her that when he doesn’t get what he wants, people get hurt. 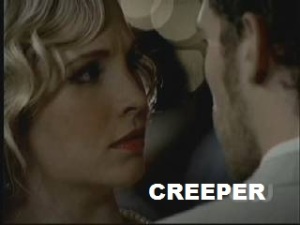 Stefan gleefully informed Klaus that mom was back in town while Bonnie half-heartedly set to work on breaking the perimeter spell and locating Elena. Bonnie and Elena’s hypocrisy is really annoying me. Bonnie (understandably) resents Damon for killing her mother, claiming he should have made another choice. Yet Bonnie and Abby chose to help Esther. They could have refused.

It turned out finding Elena wasn’t that difficult once Bonnie suggested to Klaus Esther might be at a hot spot. I guess it’s hard to keep free Wi-Fi a secret. Jeremy and Matt sped off to find Elena and nearly ended up shooting each other in the chest thanks to Esther’s magic. SMH – you’ve got to love Esther’s twisted plans.

Esther forced Elena to give it up (her blood, that is) so that she could turn Ric into the ultimate killing machine. Somehow Good Ric reappeared and knifed Esther in the back, saving the day but too late to save himself.

Esther’s death freed the vampires, who sped off to the Salvatore crypt, but not before there was a lovely Klefan scene in which Klaus made one last desperate attempt to win Stefan back. Damon was quick to flex his familial ties and reminded Klaus that Stefan already had a brother thank you very much, and didn’t need another. I’m betting at this stage poor Klaus needed a hug.

All We Ever Do Is Say Goodbye

Alaric’s decision to forego the transition was simultaneously brave and heart-breaking. The next couple of scenes were beautifully done and eloquently captured the grief and tragic loss his death represented; especially to Elena, Jeremy and Damon. 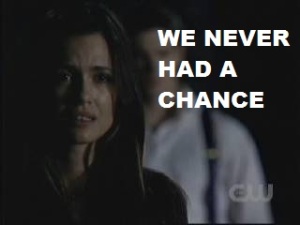 Matt and Jeremy marked his passing in a way Ric would have approved of.

How much more sorrow can Jeremy bear before he turns to drugs again, or worse?

As always Elena made it about her, sobbing tearfully to Stefan that she and Jeremy didn’t have anyone to take care of them anymore. Not that Ric took care of anything except his frequent hangovers.

Does Elena realise how lucky she is to have Saint Stefan back? Ever the supportive, caring (boring) hero that he is, he gently comforted Elena and reminded her that no matter what she loses, she will always have him. This echoed the sentiment Elena herself expressed to Matt in Episode 316 (1912) when she confessed that Stefan’s immortality was what attracted her to him.

The worst part for me was witnessing the end of TVD’s greatest bromance – Dalaric. Forget that Alaric was Jeremy and Elena’s guardian. He was Damon’s best and only friend. I cannot imagine TVD without the banter between these characters. Damon and Alaric met at the first decade dance in season 1. It was only fitting that they should say goodbye during another. 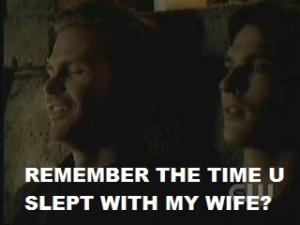 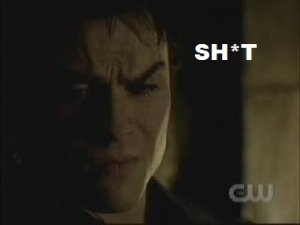 The show-runners could have ended Alaric’s journey there, but oh no. TVD had to go one step further. This is when I realised the writers are on crack. Dead should mean dead guys. That’s what gives the show depth and gravitas. We had a fake out at last season’s decade dance. Surely this time we’d earned the right to mourn a beloved character. What is the point of turning Alaric into an Original?

It Ain’t Over Yet

Even in death Esther continued to cause all sorts of problems.

Did she appear in Bonnie’s dream? I couldn’t work out if Esther had possessed Bonnie or was manipulating her mind. I was still recovering from the hilarity of Bonnie finally acquiring an address, with her father conveniently “out of town”. How droll. Whatever the cause, Bonnie wasted no time in heading for the Salvatore crypt to give a bereaved Damon a severe headache.

When Julie Plec announced Season 3 was going to be the season of the Originals I whooped for joy. In retrospect I see how taking the series in that direction may have been a mistake.  While it gave the delectable Elijah and the delicious Klaus more screen time, I think the writers struggled to come up with storylines for all the new characters. It was just too much. Consequently this season has meandered all over our screen; sometimes bringing that WOW! factor we expect from TVD but more often than not, leaving the sour taste of disappointment when the magical TVD hour has passed.

Clearly Klaus will be sticking around for season 4 – there would be a fan revolt if the writers killed him off – and possibly Rebekah too.  I honestly don’t know what they are going to do with Evilaric. Just bring back Elijah, already!

But what do you think? Is Evilaric a good villain? Will Alaric defeat Klaus? What did you think of Elena’s hair?

Tell me your thoughts! Sound off in the comments below.

Fulltime CEO, OD Consultant, Yummy Mummy,TVD fanatic, Potterite, Chelsea FC supporter and Superwoman. Lover of sports, music, books and fine wines END_OF_DOCUMENT_TOKEN_TO_BE_REPLACED
This entry was posted on Tuesday, May 1st, 2012 at 3:00 am and posted in The Vampire Diaries. You can follow any responses to this entry through the RSS 2.0 feed.
« Is it Friday Yet?
Burnin’ Down Da House »

4 responses to “Review: Vampire Diaries Episode 320 (Do Not Go Gentle) – The Original Bitch is Back”