Cue Sly and the Family Stone.

This post is neither a recap nor a review of The Vampire Diaries Episode 313 Bringing Out The Dead. Rather it is a commentary on questions raised during the episode and my thoughts on them.

Bringing Out The Dead was a treat for TVD fans on many levels. Visually it was a  hunkfest with the slickest dinner party guests ever.

Originals and Salvatores – Oh My! 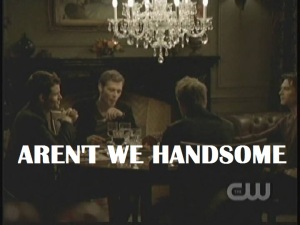 We learnt  more about the origins of the Originals, and were introduced to two new OVs. Caroline broke our hearts (again) and the mystery of who’s attacking the Council members deepened. It turns out Elena’s prints were on the murder weapon used to attack Bill Forbes. 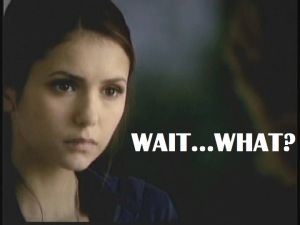 How does the Mystic Falls PD even HAVE her fingerprints?? And Meredith conveniently had an alibi for the attack on Alaric.

Something doesn’t add up here. Meredith claims she discharged Daddy Forbes to shut him up, but Bill told Caroline someone jumped him when he was trying to sneak out of the hospital. Either Meredith is lying or….well I don’t know or what. I just don’t trust her. And did anyone else notice the look Matt gave Elena when they walked into her kitchen? (Seriously, haven’t these kids seen Scream?)

This is Mystic Falls and as far as I’m concerned, everyone is a suspect. Could the evil Katherine be involved somehow?

The dinner party illustrated yet more parallels between the Original and Salvatore Brothers. Klaus’s commentary on Elena’s future with the Salvatores was cruelly accurate and struck a chord with Damon at least. 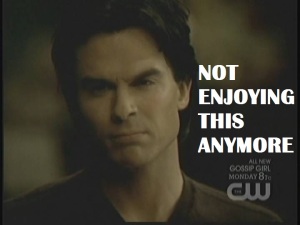 Damon  began to realise that maybe –  just maybe – neither he nor Stefan  is the best man for Elena. Later on in the episode Stefan admitted he still loves Elena (shocked!), displaying another crack in his douchebag persona.

Klaus was the perfect host though, and entertained his guests with  delectable  fare of the culinary and human variety before indulging in a little after dinner drink.

Why was Klaus so afraid of Kol? He seemed just as thrilled to see Finn:

But it was the arrival of  Mama Esther which struck  real terror into Klaus’s unbeating heart: 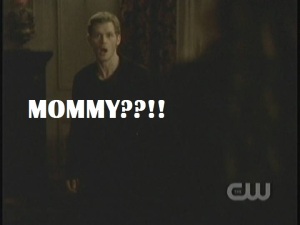 For the first time we saw a truly terrified – and cowering – Klaus, convinced he had literally met his maker.

Just what is Original Mama up to? Team Elijah appeared delighted to see her (not). What does she possess or know that can kill Klaus; and more importantly – who else knows about this? Katherine goaded Stefan into stealing the coffins for a reason. Our Kathy only acts out of self interest – what does she know about Mama O?

I’m still trying to figure out exactly what Mama O is. We know she isn’t a vampire, but is she a manifested ghost a la Anna and Vicki? Could her ultimate goal be to un-vamp the Originals with Rebekkah’s help (two generations, blood knot – natch). Yes I know Evil Blood Slut isn’t a witch, but even Klaus noted she has supernatural gifts beyond vampirism.

We are meant to believe that Esther emerged from her casket, KO’d the Bennet babes and legged it ASAP to the Klaus Haus.

Story lines are rarely that simple on TVD. I can’t help thinking something or someone else was in that coffin. I’m probably completely wrong but … it’s fun to speculate.

So many questions! I need answers! But enough from me. What do you think? Agree/disagree? Sound off in the comments below.

Fulltime CEO, OD Consultant, Yummy Mummy,TVD fanatic, Potterite, Chelsea FC supporter and Superwoman. Lover of sports, music, books and fine wines END_OF_DOCUMENT_TOKEN_TO_BE_REPLACED
This entry was posted on Wednesday, February 8th, 2012 at 8:06 pm and posted in The Vampire Diaries. You can follow any responses to this entry through the RSS 2.0 feed.
« Da Yaee Ghana
Ode to Carnival »

One response to “It’s A Family Affair”